Dermatologists watching the “Seinfeld” sitcom in November 1997 got their dander up when characters Jerry and George called a female physician in that medical specialty an “aloe pusher.” When a patient thanked that character for saving his life by detecting skin cancer, the men realized that they owed her an apology.

Dr. Tami Cassis has never seen that episode, but people often mention it to her. Those flaky “Seinfeld” characters would have known better than to disparage dermatology if they had visited her practice, Cassis Dermatology & Aesthetics Center (9301 Dayflower St. in Norton Commons). The recipient of honors such as Louisville Magazine’s 2009 “Top Doc” and Business First’s 2006 “40 Under 40,” she treats skin conditions from acne (never a laughing matter for teens) to warts, and plays a life-saving role for patients suffering from cancer or burns.

After growing up in Wisconsin, Cassis received her medical degree at the University of Louisville in 2001, and she built her reputation in Los Angeles, New Orleans and Boca Raton, Fla., before opening the center in 2008. Since 2005, she has been an assistant clinical professor at U of L and a member of the volunteer faculty at the Veterans Administration Hospital. When she is on call, hospital physicians contact her for help with burns or unusual rashes. 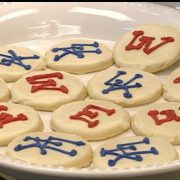 Dr. Cassis and her husband were featured in this WLKY article and Channel 3000 video.